The Fax of Life by Neil Stephen

After losing my passport and my wallet to a frisky gang on an Athenian tube, I thought I was stuck. The lady at the airport check-in shook her head ruefully – no ID means no way home. The financial implications of sorting it out were huge. “But I have a twin,” I said, pointing plaintively at Ali. “Aha” she replied. “This could work.” And it did. I got home on the basis of a flesh and bone facsimile.

So there was evidence that copying is good – or at least useful. My mother didn’t mind splitting heirs and, apparently, architects can learn from this a lesson.

It was actually a client of ours who suggested that architects are obsessed with the original and lacked appreciation of the existing. We’re far too worried about being “creative”. He’s a naval architect, and is determined that we should follow his own profession’s ethos: find the closest design to what you want, and then see if you can improve it.

He insisted that the metalworkers of the Clyde could have built the sails of the Sydney Opera House no problem. His firm had been designing and building hulls like that for years – if only Jorn Utzon had asked, it could have been done without the fuss and at a fraction of the expense.

Too late now, but I told him no doubt he was right. What I didn’t tell him was that I was actually taught the art of copying during my year out in Hong Kong. But not in the way he was suggesting.

This was 1992, and I’d ended up in one of the city’s less prestigious offices after saying at the interview, “I’m here for the experience, not the money.”

I got the experience of being poor, in a cut-throat practice.

The managing director, a nice bloke called Roger, wanted a high-rise like one they’d made earlier. Except taller, and with two towers. My first job was to photocopy the building, and paste the two towers together. Then for the elevation to cut the tops off, and paste in another ten stories. Within half an hour, the design was done.

Tom Yip, the boss, would then bark for someone to do a sketch, add in some trees, perhaps a lady with a pram, and off it would go the client. Money in the bank; another triumph for the New Territories.

This was the start of my air-conditioned career of high-rise design. The basic principle was that you have as small an area of service core to rentable floor space as possible. There’s a lobby floor, the middle floors, and perhaps a wee special floor on top, just to cap it off. The plans were manipulated to fit the site, and the materials chosen to match the client’s car.

One time I was given the elevations of a huge thirty-story tower block, and told to make it look like a “Glasgow tenement”. I found it wasn’t possible. I was handed a standard plan for executive houses for the Chinese party elite, and told to do “ Spanish, Chinese, Italian and English versions”. Mr Yip came to see my labours, and after peering over my shoulder for an eternity asked me a question. “Neil. Why are you so shit?”

I should have asked him the same.

At a design meeting, he took the pile of drawings from the architect sitting opposite him (who happened to have started that week). The first drawing he didn’t like, I assume, as he shouted, “shit!” He then scrunched it in to a ball and threw it in to the architect’s face. He repeated this with each one of the drawings. The poor bloke sat with head bowed and took it.

I can hand-on-heart say that I’ve yet to do that to someone at Dualchas (get back to work Laura, you don’t have time to read this).

But back to real architecture. Incremental improvements to what has been proven to be successful. This is what the naval architect was talking about, not the depressing crap that was churned out by the likes of Yip San. Our client was of the opinion that architects like to reinvent the wheel – to do flights of fancy with other people’s money, rather than finding the best solution developed from the research and skills of others.

Fortunately for our client I’m not clever enough to reinvent the wheel, or anything else, but I like to think that we can learn from others and keep trying to improve.

As my old tutor Gavin Stamp used to enthuse, Greek Thompson didn’t copy the Greeks – he sought to understand ancient architecture and then use the vocabulary to create an architectural language of his own. His fancy only took flight after he fully learnt how to fly – and understood how to ground architecture within the fabric of a city.

Another thing Mr Stamp used to say was that the most important requirement of a building is charm (after keeping the rain out). If the building sat charmingly within it’s surroundings, and charmed it’s occupants, then the architect was close to doing his job.

And Andy MacMillan would say that dogs pee for location; people build buildings.

This all sounds rather basic, but for me it’s easier to understand than the complexity of Meier, or the angles of Zaha. Keep it simple, but aim for beauty.

Which takes me back to my twin.

Through a burdensome labour, my mother had followed the working methods of the naval architect. She launched Alasdair, her first design, and almost exactly one minute later, she slightly improved upon it. 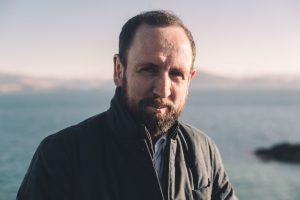