Getting on in Architecture by Neil Stephen

First published in February 2009 on scottisharchitecture.com Neil Stephen reflects on the ageing process.  You can see the devastating effects on the young man below above. 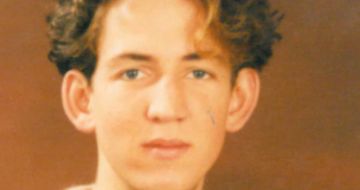 Soon, I’ll no longer be a young architect. The dream of being one of the AJ’s 40 under 40’s, where young architects are exhibited and celebrated, will now have to be binned along with the dream of scoring the winner for Scotland in the last minute of extra time in the World Cup final against England, and snogging Stevie Nicks (she’s getting on a bit).

Impending mid-life was rammed home recently after I joined a few school pals for a weekend in a Fife chalet, where we went though the formality of drinking to our poor health and burying our youth. I looked across at the people I used to scarper around the playground with, and saw balding men with grey hair, puffy eyes and dance moves that would embarrass John Prescott.

Someone once said that the trouble with hanging around with old pals is that the ageing you don’t notice in a mirror is instead reflected back in their sagging faces.

Fortunately for me I have a twin, and he could pass for 34.

But it’s a good time to look back and assess what you’re doing and what the future might hold. One generation inevitably takes over from the previous – foolish youth of today become the wise elders who frown on foolish youth.

One of my friends at the weekend trip used to be foolish – he still is.  He’s a project manager. He was so highly wound-up from the stresses and pressure of work, I was wondering if he’d reach 40. He was telling me in all seriousness that he was hoping to get a junior colleague sacked, because he wasn’t prepared to put in the 13-hour day that he does; apparently he had children he wanted to see in the morning.

What sort of industry is this? When I was 22 and getting screamed at by my boss Tom Yip in a Hong Kong office, I found that I had to assess what was important to stop myself from getting upset. Firstly, I’d ask myself: ‘Do I respect this guy?’ No. ‘If I lose the job, is it the end of the world?’ No. I was young, and the world was my oxter.

My stressed-out project manager friend shared a room with me in Hong Kong, along with countless bed bugs. He was a newly qualified Q.S. and seemed to cope fairly calmly with what the world threw at him. One morning he asked me if he’d seen me in the middle of the night with my genitals hitched up over the basin, frantically cupping water over them while making high-pitched noises? Or was he dreaming?

He was very relieved to hear that it wasn’t a dream (he was at a confused age), and that I’d had a dreadful miscalculation applying Tiger Balm to my bug-bites. The memory still brings a tear to my eye.

If I exposed myself (metaphorically) to my pal in his work arena, I wouldn’t get the same sympathy I got then. I get the impression that he’d have no qualms about ripping my balls off and ramming them down my throat, if he felt it was necessary to keep his client happy. It’s a worrying thought, almost enough to make you gulp.

This is of course highly speculative and very unfair – but the industry does encourage aggression. 18 years ago my pal was a whisker away from giving up quantity surveying to follow his dream of being a jazz musician. Instead he’s now had a divorce, got a bachelor pad with guitars hanging off the walls, and spends his days tearing strips off contractors and nailing architects to the floor.

But then things don’t always happen as you imagine or hope.

My first experience of working in an architect’s office wasn’t great. To start me off, I had two weeks to practise my calligraphy. When I found some escape from the mind-numbing boredom by carefully penning phrases like “a piddle of politicians” the boss’s son told me to mind my P’s and Q’s and get back to the alphabet.

Another day I managed to get greasy fingerprints on one of the architect’s drawings, and the same culprit kliped on me to the second in command, who took his lofty position seriously.  I was primly told in front of all the staff that if I ever did that again he would “have my guts for garters and my balls for earrings”.

His bark was sharper than his bite.

The boss had his drawing board up the stairs next to mine. He rarely used it, but I would hear him charging about the office, constantly battling his indigestion and stress. I clearly remember one day when he sat beside me at his board, stared at the paper for minutes in silence (I was hardly breathing) and then slammed his T-square down as hard as he could, shouting F***!

My heart almost jumped out of my mouth, but it quickly plummeted to the pit of my stomach at the thought of continuing to work in such an atmosphere. The only thing that kept me going was the chance to stare at the cat-eyed 25 year-old receptionist in the leopard-tight outfit (it was her permanent skin – I think she must have smelt like a leopard).

Instead of being a 19 year old with all the joys and ambitions of over-confident youth, I was miserable.

But I didn’t listen to him; I knew about that architect’s career and achievements. Along with my dad and many others, he designed some of the best hospitals in the UK, the Glasgow Sick Kids and Paisley District General. They were young graduates from the late 60s with an overwhelming sense of social responsibility and purpose, who took their role as architects extremely seriously. They thought they could change the world for the better.

And they did. Unfortunately the world hasn’t been so good to them. My father retired early due to ill health, and when I look at the casualty list of his contemporaries –alcoholism and heart disease, mental health problems and family break-up, you can see the dreadful and unjust burden that the profession places on people.

My dad will now happily pass on his wisdom to folks he meets in his local pub in Aberdeen – he’s in his late 60s but most of his architect pals from his student days are dead. He can also pass on advice to his sons – he has an incredible wealth of untapped empirical knowledge and skill – but his main advice is simple. ‘Don’t let the job wear you down, and don’t allow the conflict of contracts affect your health.’

It’s a sobering thought. And if I look at my project manager pal and worry about his health, I should also look at mine.

Fortunately, I manage to avoid stress, usually, and I like to think I have the physique of Barack Obama (or is it Gok Wan?) I run cross-country, I’m a member of the local football team (non-playing committee member) and have been getting unsolicited karate lessons from a black-belt Broadford butcher (I only went in for something for my dinner and I ended up with a load of mince and four chops).

But I’m probably not yet half way through my architecture career, and I still don’t have a clear vision of what I want to achieve. I know I want to avoid the burnout and disillusionment of my father’s generation, but I’d love to have their sense of purpose that sprang from the social morality of the 60’s and 70’s. Hard to find in the modern world of PFI and coddled clients.

Some young architecture graduates probably dream of being a renowned and successful architect, head of a huge organisation, with millions in the bank, churning out sleek metal and glass perfection for the grotesquely rich of the Middle East and the City elite, and humbly taking a seat in the House of Lords when not at home in Switzerland.

Most, though, probably just want to earn a living. Not easy when even the experienced are getting dumped by the cart-load as the recession wreaks havoc across the industry.

But, before things pick up, as they will eventually, perhaps it is the right time for the profession to ask itself, ‘what is our purpose?’ Are we ‘servants to the industry’ as one eminent Scottish architect stated recently? Or do we have another role, as leaders and visionaries, who want to make the world and our communities a better place?  Rather than just scratch a living, please a client, or pick up some baubles from our peers?

We have a responsibility to set the agenda in building our communities – not leaving it to the soulless developer, mundane planner, or blinkered politician.

And we also have to do it in a happy and healthy working environment. After all, getting to design and build things was always brilliant fun as a child – and it still should be. Why should the sheer vitality and ambition that springs from us all dissipate to routine and regret?

A couple of years after I left my first architect’s office, I saw my former boss’s obituary in the paper – dead in his mid-sixties. He’d done some good buildings, brought up a family, but my overwhelming feeling was sadness – sadness that a man who had worked so hard and under so much pressure, never got the chance to relax and look back on his achievements, or even ask the question: ‘Was it worth it?’

For my school pals, all I can say is that I’m fortunate still to be in touch with such good friends. I hope that when I have a reunion with my Mack pals later this year I can look at them and see happy, contented faces, not too worn by the rigours of work.

And what for my highly-strung friend, the project manager? Isn’t it time to take one of the guitars off the wall and do the thing you really love? Who knows, your life may depend upon it.